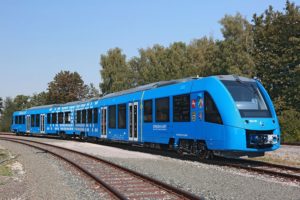 Today we are used to two types of railway transport: either electric trains that take power that is generated elsewhere and brought to the train via a overhead catenary or a so-called “third rail” or diesel trains that covert the energy contained in the fuel in an often quite large diesel engine and bring it to the wheels using different forms of transmission. The diesel dominates on a worldwide base because it enables autonomous operation with comparatively low investment: All you need is a track, signalling, fuel for the locomotive or DMU and off you go. But diesel power means carbon footprint, pollutant emissions from particulates to nitrogen oxides right where the train is running – often enough close to where people live.

So what we need going forward is a system that combines autonomous operation and clean power. Enter hydrogen. If it is used together with fuel cells and batteries it enables a clean autonomous generation of electric power that is used for train propulsion as well as the creature comfort passengers have come to expect from modern rail transport and keeping teh environmental signature low.

For over 15 years researchers, engineers and rail operators have been working hard, delivering and testing various hydrail prototypes for a variety of rail applications. Now we are confident: Whether the objective is to enable regional connectivity, green logistics in railyards, ports or connecting major hubs with clients on non-electrified trunk lines, hydrail solutions can be applied today. 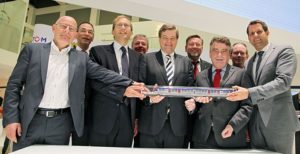 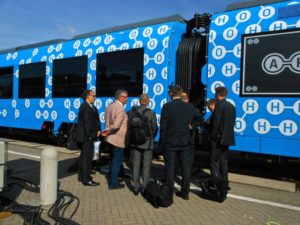 In 2014 the ministers of transport of four  German states and ALSTOM signed a LoI declaring their joint intent to have a regional commuter train developed based on hydrogen and fuel cell technology and operating at least one or two units on selected regional networks by 2018 with a view to purchase originally 40 units, which has meanwhile increased to 50. At the Berlin Innotrans fair 2016  rail experts got a a first peak at the results and the future of autonomous electric rail: ALSTOM unveiled their Corradia iLint regional train, the newest variant of their Corradia line powered by a hybrid hydrogen fuel cell propulsion system.

Currently under detailed testing to achieve homologation and well on its way to TSI certification scheduled to be concluded for the end of this year,  all of the 50 units will be operated in the pioneering German states, first in Lower Saxony, then Baden Wuertemberg, Hessia and North-Rhine – Westphalia; likely to be followed by others like Schleswig-Holstein and rapidly expanding beyond Germany. 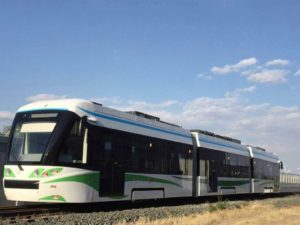 Light rail or tram applications can also profit substantially from hydrail technology. As could be learned from the first such installations in the Caribbean and Dubai, it enables a much faster deployment of tram lines as a number of complications and investment requirements that come with conventional catenary based tram solutions are eliminated. Some investigations suggest that such designs will prove to be competitive with Rapid Transit Bus systems on a total cost of ownership (TCO) base, owing to the much lower energy consumption per passenger km. Chinese rolling stock manufacturers have been at the forefront worldwide announcing mass manufacturing and deployment strategies as well as demonstrating prototypes such as the one shown here. The first units in real revenue service were, however, the already mentioned special units in Oranjestad, Aruba and the Dubai. In these locations the operators opted for historic designs which together with the fact that operation comes without the visual obstruction of catenary lines makes hydrogen fuel cell powered tram solutions particularly attractive for touristic regions. 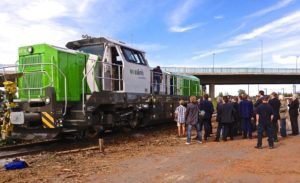 Shunting locomotives are a prime example of units that could profit from hydrail technology. Typically used in railyards or ports often in proximity to city centers the contribution of these generally diesel powered units to urban pollution can be significant, but equally often regulations do make the use of standard electrified solutions difficult or cumbersome even impossible.

Enter hybrid hydrail systems, a design that for shunting  is likely to be battery dominant with the hydrogen fuel cell unit acting as range extender. This combination is a leading contender to keep both operators and neighbours happy, since sudden load changes to the power units do not produce a corresponding increase in noise levels or emissions, yet  operating this clean technology may not even increase the operating cost.

Changing the balance between battery and the hydrogen fuel cell unit and generally increasing power would also enable design and operation of similar units as road switchers capable not only of shunting, but also of pulling trains at the requisite speed for freight trains.

The first full scale design was built and evaluated in the USA in project involving the conversion of a BNSF switcher, not unlike the unit shown here. While this unit is not a hydrogen version, its modular design would make a design variant rather simple. Currently there are projects to build and demonstrate further units in this application in Germany and Czechia.

And the hydrogen supply infrastructure?

Initially, hydrogen for trains will come from existing sources, like the plants operated by the gas companies shipping gas today. In addition, by-product hydrogen will complement this supply.

Here, the rail sector may benefit from its own transport capacity. Recent studies indicate that such a transport could be efficient in terms of both energy and cost  even for supply distances as high as 1000 km.

In the longer run hydrogen for rail could prove an attractive market for excess renewable power. Its demand is steady and mostly determined by schedules, the consumers operate exclusively along predetermined corridors or within reasonably well defined confines.

Actually, the whole hydrogen economy could profit from the synergies potentially available if the rail sector would progress in close synchronisation with urban public transport. This would enable building core infrastructure nodes that already could be fully cost covering, if not profitable, while still providing reserve capacity to be utilized by individual motorized transport utilizing hydrogen, such as private FCHEV’s.